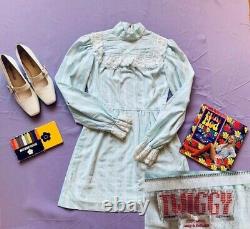 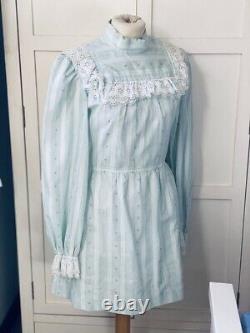 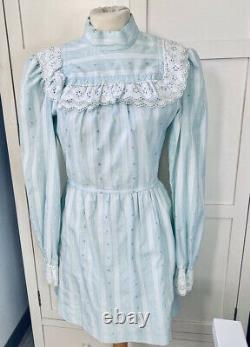 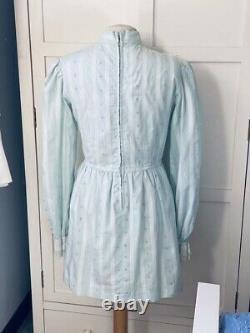 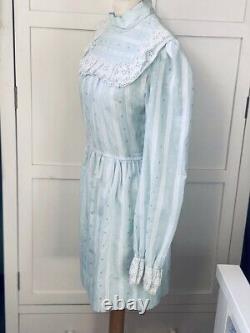 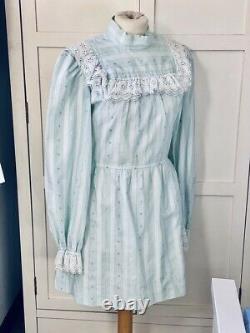 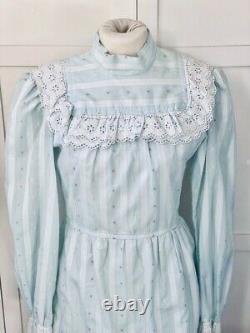 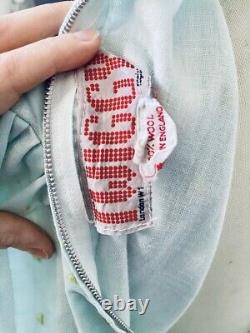 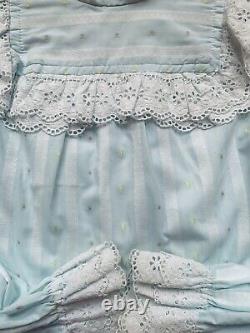 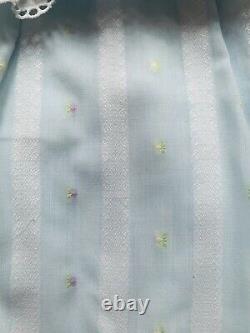 Very Rare TWIGGY label collectable original vintage 60s Babydoll Mini dress embroidered, size UK 8Excellent vintage condition. Very gently worn and well cared for. The Dress has lace details in chest and cuffs and beautiful embroidered mini flowers in soft yellow and lavender (check last pictures) the white lines are also embroider, back zip closure. A little bit of History.. They flew her out to Tunisia to sign a contract, but when she discovered that what they were really after was her famous name on a range of clothing they had already begun creating she decided to go ahead with her own range, but start it with a company that would allow her to have real input. Taramina Textiles made old-lady frocks and wedding dresses. The company was run by two brothers-in-law, Leonard Bloomburg and Sydney Hills not surprisingly the range was called Twiggy Dresses.

The teenage market was something quite new to them which was great for us, as it meant no pre-conceived ideas or old stock to get rid of. Right from the start it was agreed everything would be things that I would be happy to wear. The range was heavily influenced by Quant and Courreges, featured acid-drop colours and fabulous daisy prints, and had a distinct retro feel influenced by the styles of the Roaring Twenties that Twiggy had such a love of. I dress very strangely some times and the things that suit me wouldnt suit everyone else.

So things have to be adapted and sometimes toned down to make them commercial. The range was launched to the Press in November 1966 via a range of photographs taken by Barry Lategan (whose photo had launched her career as the face of 66), an advertising campaign using the slogan its a twiggy world, and amazingly Twiggys only catwalk modeling. In those days you didnt do both and the top girls were photographic models only. Given the fact that nothing ever fitted me (what you dont see in the photographs is the bulldog clips and safety pins at the back) its a good thing.

But the Twiggy Dresses were made with me in mind. Apart from the famous celebrity behind the expensive label, an added sales technique was the unusual portrait hanger that came free with every piece of clothing. At the start of 1967, 150 outlets in the USA had expressed an interest in the clothing range so long as Twiggy herself was part of the package, so she headed over to the US to launch the range over there and her visit was turned into a series of three documentaries for ABC Television.

A million dollars of orders were placed in one afternoon before Twiggy had even left New York, but due to there being no American manufacturers backing the label, pirated copies flooded the market before the company could supply its huge US market. In 1968 Twiggy visited Munich to launch the label in Germany. In 1970 Twiggy visited the stockrooms to look for something and discovered that all of the dresses there had a new label Miss T.

It turned out that the manufacturers had been fulfilling the Twiggy dress orders with half Twiggy dresses and half Miss T dresses which Twiggy had no input or financial involvement with. The item "Vintage 60s Mod Mini dress super Rare Brand TWIGGY Label collectable original" is in sale since Wednesday, January 6, 2021. This item is in the category "Clothing, Shoes & Accessories\Women\Women's Clothing\Dresses".

The seller is "retrogogo66" and is located in Emeryville, California. This item can be shipped worldwide.